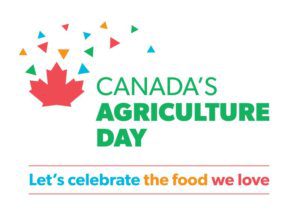 Last year in June come of Canada’s top agriculture representatives announced that February 16th, 2017 will be Canada’s Agriculture Day – a celebration to draw a closer connection between Canadians, our food and the people who produce it.

Did you know that in the 1930’s more than 90 percent of Canadians had a connection to agriculture? According to Statistics Canada, it is less than 3% of the population that has a connection today. That is an amazing number considering 100% of us eat!

“Every link in the food production chain – from the farm to the grocery store and restaurant – plays a vital role in bringing food to your table every day,” said Mackay, whose group organized the summit. “Canada’s Agriculture Day is an opportunity to get involved, celebrate and be a part of the conversation about food

With World Statistics predicting the  World Population to boom to 8.5 billion by 2030 and up to 9.7 million by 2050, so will there need to be an  increase in food production

According to Farm Credit Canada 2015 Farmland Values Report. Saskatchewan has the largest farmland market at 38% followed by Alberta at 32%. In comparison to other parts of the World, our land is still also relatively affordable and attainable making this province a great success and driver in the Agriculture industry.

So we in Saskatchewan are celebrating along with the rest of Canada this diverse growing industry of people who help put our dinner on the table!