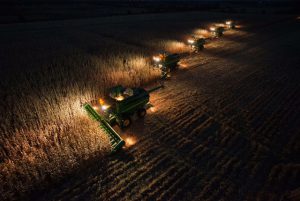 Rain slowed harvest in most areas of the province last week. The most progress was made in parts of the west-central and northeastern regions, where spotty rain showers allowed producers to continue working in the field for a day or two. Thirty-eight per cent of the crop has been combined and 38 per cent is swathed or ready to straight-cut, according to Saskatchewan Agriculture’s weekly Crop Report. The five-year (2011-2015) average for this time of year is 44 per cent combined.

Frost was reported in some areas in the northwest, with temperatures dipping to -2C; however very little crop damage is expected as the majority of crops are mature. Wet harvest weather continues to cause downgrading in crops. Bleaching, sprouting, fusarium and earth tag are causing grade loss. Producers are busy harvesting and seeding winter wheat.

See here for all the details.