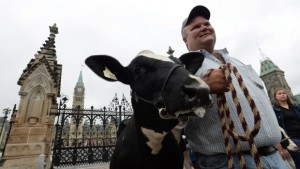 The Saskatchewan government is showing its support for the Trans-Pacific Partnership (TPP).

Premier Brad Wall said the partnership would allow Saskatchewan to improve trade in the Asia-Pacific region.

Canada and 11 other countries are involved in the negotiations.

But the supply management system for Canadian dairy, egg and poultry has been criticized. Some Saskatchewan farmers like Melvin Foth are nervous.

“On our farm, we’re trying to build barns, we’re trying to expand, and that makes the whole investment questionable,” Foth said. “We really are hopeful that there will not be access granted on dairy through these trade talks.”

Foth said if the supply management system is scrapped, it will drive his costs up and drive prices below the cost of production.

“It would definitely have an impact on, I believe, producers, processors, and the whole economy,” he said. “But for here on the farm, definitely it would have an effect of the amount of milk we could ship.”

Foth remains optimistic that Canada will keep its promise to maintain the supply management system.

Here is Premier Wall’s full statement on the TPP:

U.S. President Obama has received trade promotion authority to fast-track negotiations in the United States. It is clear that the TPP can be concluded quickly, with or without Canada’s participation.

Since Canada joined the TPP negotiations in 2012, Saskatchewan has supported the federal government, encouraging it to be fully engaged in the negotiations and to show a high level of ambition and flexibility in order to achieve a balanced outcome that benefits our country’s export sectors and Canada as a whole. As with any negotiation, some concessions will need to be made to conclude a deal, but the overall benefits of increased access to this growing region will far outweigh any negatives.

The federal government has indicated that it remains committed to preserving the supply management system in Canada. However, I fully expect the federal government will continue to engage in trade agreement negotiations on the basis of merit in order to achieve an ambitious outcome that benefits the entire Canadian economy. My government firmly believes that Saskatchewan’s and Canada’s long-term export interests will be best served through more open trade and expanded access to world markets.

As the negotiations move into this critical and potential final phase, Canada’s presence at the table is crucial. Trade accounts for more than 60 per cent of our country’s gross domestic product, while exports account for one in five Canadian jobs. Access to global markets is particularly important Saskatchewan, which is one of the most export-dependent jurisdictions in the nation.

The TPP is a once in a generation opportunity to strengthen our trade and investment ties in the dynamic and fast-growing Asia-Pacific region, creating jobs and prosperity for all Canadians. This region accounts for nearly 40 per  cent of the global economy and is home to approximately 800 million people.

The TPP can move ahead with or without Canada. If other countries proceed without Canada, the consequences would be dire. Not only would we lose the opportunity for additional market access, but competing nations, such as Australia, New Zealand and the United States, would gain preferential access to key markets.

In Saskatchewan, our agriculture producers rely on trade to generate their income. In 2014, over 95 per cent of their $13.1 billion in farm cash receipts came from export sectors. Much of our future growth and prosperity is dependent on having good access to the Asia-Pacific region.

As the talks on the TPP enter the final stages, I wish our federal negotiators success in delivering an ambitious and comprehensive agreement that will benefit all of Canada.